This blog post is part 1 of a multi-part series that explores the shared values of wilderness conservation and indigenous tradition.

A natural collaboration waiting to be unearthed

Native Land Conservancy (NLC) and Northeast Wilderness Trust (NEWT) have joined in a new partnership to grant land rights to NLC and the Wampanoag Nation, and to explore commonality between wilderness conservation and indigenous tradition and lifeways.  Native Land Conservancy (www.nativelandconservancy.org) is a Native-run land trust based in southeast Massachusetts with a mission to preserve healthy landscapes for all living beings and to help restore the land back to its original state wherever possible.  Northeast Wilderness Trust is the region’s only land trust focused on protecting forever-wild landscapes in New England and New York. 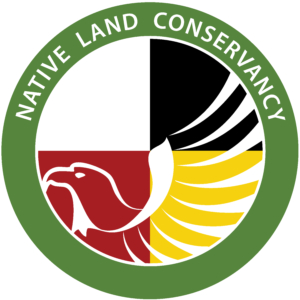 A partnership between a wilderness organization and a Native-led land trust might seem odd to some.  There is frequent chatter about wilderness protection being “anti-indigenous.”  The two conservation organizations have found that they have far more in common than in conflict.

The seed for collaboration was first planted when NEWT conserved Muddy Pond Wilderness Preserve in Kingston, Massachusetts in 2018 and began talking to various local stakeholders. The Wilderness Trust had the good fortune of being connected with representatives from the Mashpee Wampanoag Tribe including Ramona Peters, founder and president of the Native Land Conservancy, and Leslie Jonas, Vice Chairwoman of the Conservancy.

“Muddy Pond Wilderness Preserve not only was the historic homeland to the Wampanoag, but it is still their home and they are still here,” said Jon Leibowitz, Executive Director of Northeast Wilderness Trust.  “We decided early on that we wanted to find ways to honor that relationship while also following through on the Wilderness Trust’s mission to protect wild landscapes.  Out of that dual purpose has blossomed many incredible, soul-searching, honest, and hopeful conversations between NLC and NEWT.”

The seed of partnership began to take root and spread its leaves in October of 2020. NEWT’s Board passed a Corporate Resolution honoring the Wampanoag’s cultural connections to the Preserve and stating its eagerness to “develop an enduring, honest, and good relationship built on trust and reciprocity with the Native Land Conservancy.” The Resolution also acknowledged the limiting definition of “public access,” and the ways the word doesn’t describe Native communities and their relationship with and to the land.

“We live during some extraordinary times, with events defining our historic fragility,” said Leslie Jonas of NLC. “Coming to terms with an uncertain and confusing future because of climate events that cannot be predicted poses a continuation of species extinctions and ecosystem failures that cannot be stopped. Humanity is charged with developing solutions to protect the natural world that remains, and learning how to transform the lifestyles we created that harm her. For the NLC, we are tasked with land rescue and conservation; ensuring our indigenous cultural traditions currently threatened, are preserved.  We have ancestral ties to the land, and we are embedded within the ecosystems so cultural respect and access to land is critical to our survival.”

“We find ourselves reminding people that she, Ahkee the earth mother is a living being,” added Ramona Peters of NLC. “It is quite shocking to learn that so many do not feel that truth. The disconnection accounts for the cause of such devastating destruction what I used to think of as meanness, now I understand it as ignorance. Other land trusts typically view Ahkee as a resource which is still steps away from the value she deserves. Northeast Wilderness Trust relates to Ahkee in a much deeper and respectful way. We appreciate the difference they model and admire the power and reach they have to protect her. It is far stronger than many indigenous people at this point in history.”

With Corporate Resolution in hand, the organizations got to work outlining their mutual objectives codified within an MOU. The organizations formalized three primary goals in February 2021.

First, NEWT and NLC will enter into an agreement called a Cultural Respect Easement.  A Cultural Respect Easement (CRE) opens the door to untold stories on the land through oral tradition. These stories are held deep within the DNA of land and when shared, give life to untold cultural legacies—legacies of ancient knowledge, ideas, culture or lifeways that are preserved and shared through storytelling from one generation to another. This act of oral tradition speaks to and ensures the protection of indigenous cultural values, practices, and lifeways rooted in Native preservation principles of land.

“The Cultural Respect Easement welcomes indigenous people to regain access to lands they have been separated from for, in most cases, centuries,” explained Ramona.  The grantor (in this case, NEWT) is in a sense making a land justice statement by inviting indigenous people to share a cultural landscape with which they desire reconnection.  “Access may be desired to exercise spiritual and cultural practices including recitation of historic information in the form of oral tradition, a legacy for future generations,” said Ramona.

“Establishing CRAs in the southeastern Massachusetts area will also rekindle indigenous connectedness to the ancestral homelands that have been lying dormant for centuries,” added Leslie.  “We remain dedicated and committed to rescuing land, preserving indigenous cultural lifeways, oral tradition, and its ancient stories for both native and non-native people.”

Many lands conserved by land trusts across New England, and the country, have public access.  However, such an idea is often exclusive to certain people, even if unintentionally so.  It’s important to ask, who is the public access for and what kind of access is being promoted?  It’s most often in the form of recreation such as hiking, biking, rock climbing, etc.  These uses are not always welcoming to or consistent with the traditional relationship between Native Americans and their homeland, nor are they always compatible with the habitat needs of certain wildlife species.

For tribal communities, open space and open access to land is inherent. And, it often looks different than what land trusts define and implement as recreation-based public access. The alienation of indigenous peoples from sites of spiritual and cultural significance has been around for centuries, yet those lands and connections still remain, regardless of years of separation. Land absorbs history, yet most of the original North American folklore embedded in the earth is being lost.

“The reality, as I learned during these conversations, is that Native Americans don’t often feel welcomed on conservation land, or land trust land, even when it is open to the public,” said Jon.  “It’s frankly a privilege I was ignorant to until very recently.  As I learned more, I concluded that there was nothing at odds between our forever-wild management style and providing access to the Wampanoag Nation.”

“While some may say our stories are not lost, but frankly hidden by the shade of modern technologies called ‘progress,’ progress for indigenous peoples includes the continuation of indigenous lifeways as an extension of life with the natural world; the preservation of age-old, practices that secure our cultural survival,” said Leslie.

NEWT describes wilderness as land that remains largely “untrammeled,” a word the land trust extracted from the Wilderness Act of 1964.  Untrammeled places are where nature directs the ebb and flow of life and where resource extraction is prohibited.  It is a commitment to providing plants and animals with places where they will not be deprived of freedom of expression or action (the Webster definition of untrammeled).

The groups have identified a number of uses that they both find compatible with a commitment to untrammeled lands and traditional use, the specifics of which will be ironed out in the Cultural Respect Easement in the coming months.

After exploring this concept, over time, the groups recognized that while described in different ways, their values are similar: they both share reverence for the natural world, recognize humanity as part of nature rather than separate from nature, and share humility in accepting that humans are but one species among many–all of which have intrinsic value.

“When we had that conversation and I recognized the shared values, I felt confident this partnership would work,” said Ramona.

“We are thrilled to work towards donating a forever-wild easement on Muddy Pond Wilderness Preserve to the Native Land Conservancy,” said Mark Anderson, Board President of Northeast Wilderness Trust.  “Our vision for a wilder future means not only honoring the lifeways of plants and animals, but also native lifeways based on a reciprocal relationship with nature. There is no better path for such a cultural transformation than learning from the original people of North America. We hope to create a partnership at Muddy Pond that can be replicated across the country.”

The final element of the MOU was to develop a shared communications strategy where the partners will seek public forums to discuss their work, shared values, and create a model for the land trust community to consider replicating.  This may come in the form of op-eds, presentations, and jointly-run educational events at Muddy Pond Wilderness Preserve.

Coming up next: Part 2 of this series will take a deep dive into the shared values between rewilding the land, rewilding ourselves, and Wampanoag culture.  We’ll also explore some on-the-ground work both groups have been undertaking at Muddy Pond Wilderness Preserve.