NEWTS FROM THE FIELD, WILDLIFE

Newts from the Field is a seasonal installment written by Wildlands Ecology Director Shelby Perry, bringing you the wonders of nature from out in the wilderness.

I love the beauty and simplicity of winter time, but it is by far the time of the year that feels the most hostile.  This year especially, since the majority of my interactions with other people remain outdoors, I am feeling the chill of winter in very real ways.  When the days are cold and the snow is deep, it can be hard for me to get motivated to even get outside for a walk with a friend, so it’s hard to imagine how wild animals—especially small ones like birds and rodents—can survive such harsh conditions all winter long. 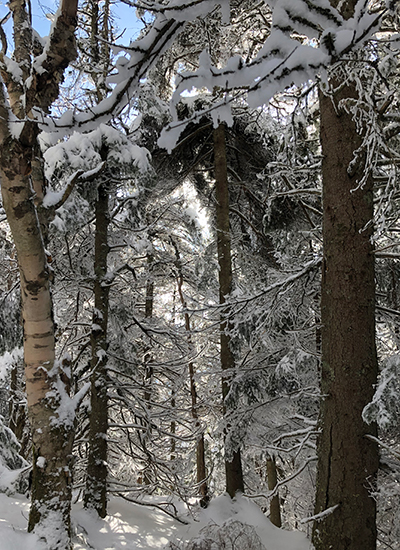 It turns out that in the Northeast deep snow and cold weather actually play an important role in many of our local wildlife’s winter survival strategies. This is yet another reason to be worried about climate change: if our local wildlife have adapted to rely on the cold and the snow, they can be in serious trouble when those things disappear.

Snow is cold, sure, but it is also a pretty good insulator. When the snow depth is eight inches or more, the ground surface beneath it can stay around freezing (0° Celsius, or 32° Fahrenheit) even when air temperatures plummet. Animals take advantage of this more comfortable climate in a wide variety of ways.

Rodents such as mice and voles tend to spend most of the winter beneath the surface of the snow, in what we call the “subnivean zone.” This term comes from the Latin for under (sub) snow (nives).  hese tiny mammals can create elaborate tunnels and chambers, both by excavating areas out themselves, and by using areas naturally shielded from snow accumulation. Each set of snow caves might contain a sleeping chamber, a cache of food, a room for eating, and a bathroom. 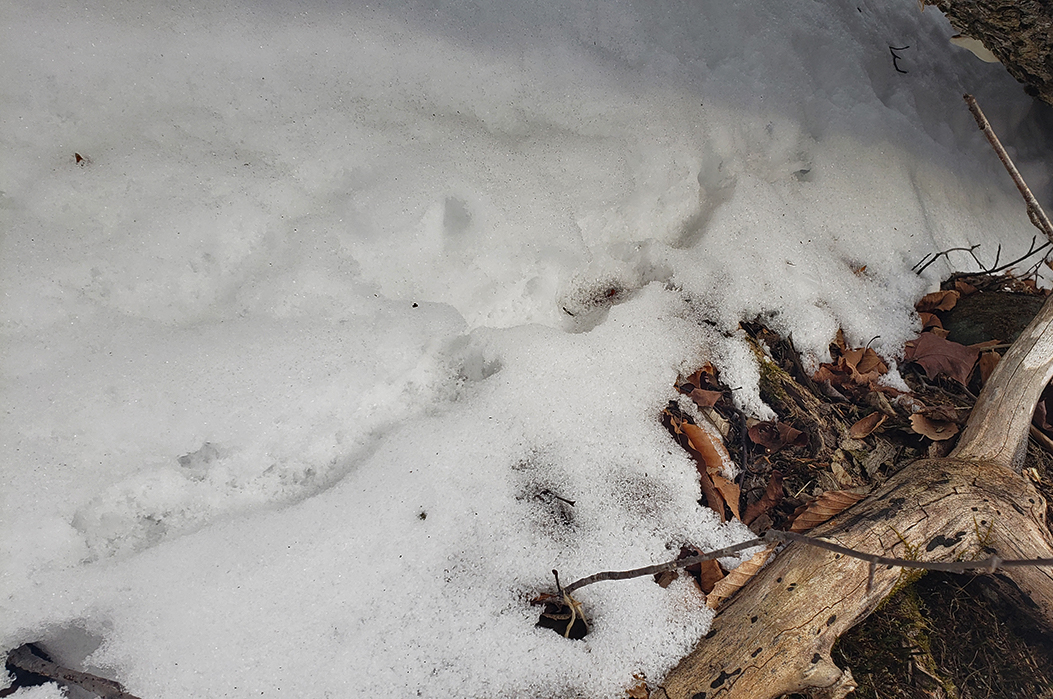 With a subnivean home, a rodent won’t have to venture to the surface very often, where they would be pretty obvious to predators on a backdrop of white snow. While safer, hiding in their holes isn’t without its risks. Tunnel collapses can crush them, melt water can flood them out, and these tunnels are not predator-proof. Smaller predators, like short-trailed weasels, can fit into the tunnels to seek out their prey. Sometimes they will even move in and take over, eating all the resident rodents and setting up a little homestead of their own! Predators with excellent hearing, like foxes and owls, can hear the rodents moving under the snow and will punch through the roof of the tunnels to grab their prey. A favorite winter find of mine is wing prints in the snow, left behind when an owl has dropped from above to grab a rodent out of their subnivean hide-away, and then taken off again.

A different kind of wing print in the snow, pictured below, can indicate not a predator attack but a snowy survival strategy. Ruffed grouse are known to keep themselves warm overnight by literally diving right into fluffy snow. When the snow is at least eight inches deep and isn’t crusted over with ice, a ruffed grouse will fly headlong into it, tunneling up to a few feet further in before settling down for the night. In his book Winter World, Bernd Heinrich reports flushing grouse out of their “snow roosts” as late as noon on his walks in the Maine woods. 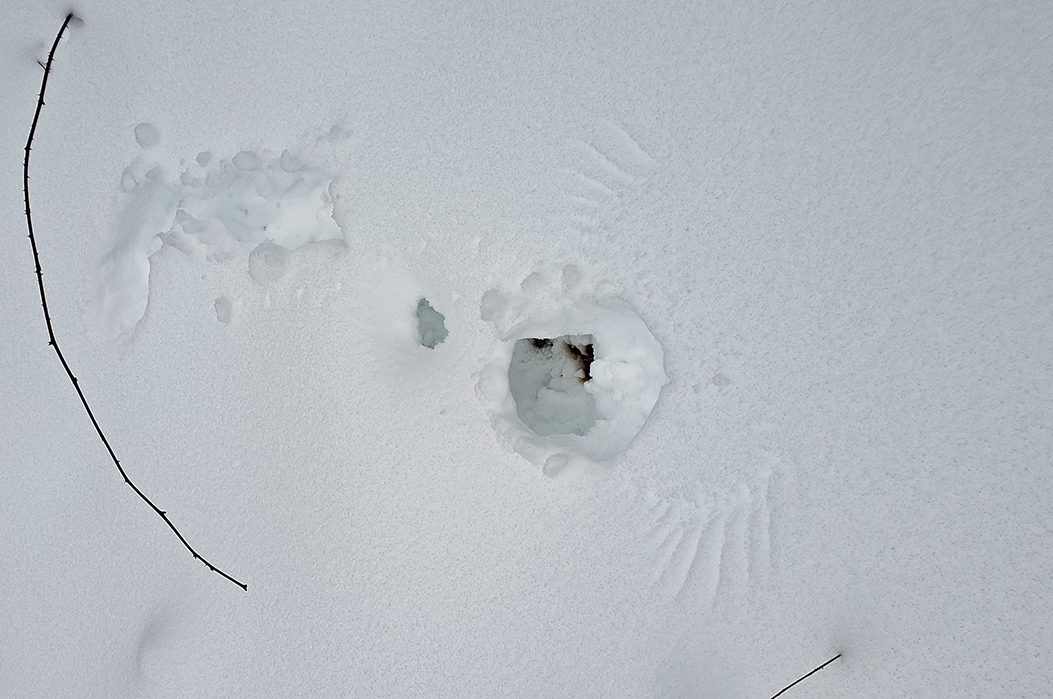 Similar to rodents’ subnivean tunnels, snow roosting allows the birds to burn fewer calories and affords some level of cover from predators. But like many survival strategies, this tactic does not come without costs. Perhaps the most dangerous is when a crust forms on the snow’s surface overnight, and the bird is unable to break through it in the morning. In these cases (which seem to be rare) the grouse may starve to death just beneath the surface of the snow.  Cold and snowy winters have been the norm in our region for millennia, and they have become vital parts of our native fauna’s survival strategy. Cold winters without snow, or winters that bring multiple freeze and thaw cycles, harm native wildlife’s ability to cope with the elements. As we think about the negative impacts of climate change, it’s important to remember that it’s not just humans who will feel those impacts. Protecting the carbon held in forest today helps safeguard a healthy future for all life, not just humans. 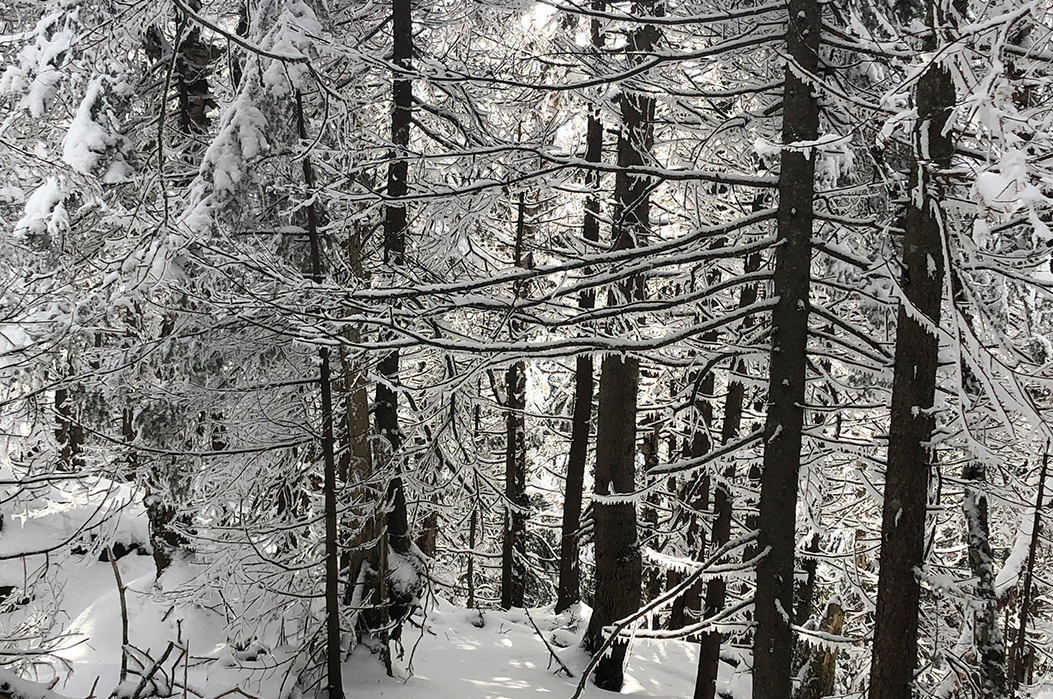