The Binney Hill Wilderness Preserve protects 535 acres, including the entirety of Binney Pond and its shoreline, more than a mile of the historic Wapack Trail, and habitat for moose, bobcat, and other wandering wildlife. 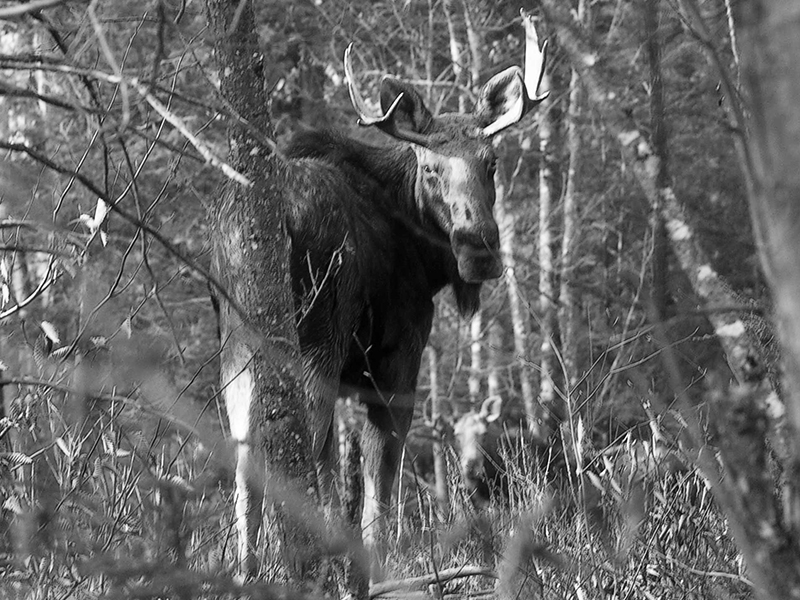 The Binney Hill property was purchased by Northeast Wilderness Trust in October 2016, protecting 488 acres across four parcels in southern New Hampshire that preserve connectivity for wildlife and people in this region. This land abuts the Binney Pond Natural Area to the north and Ashburnham State Forest to the south, and connects our own Wapack Wilderness easement with the protected areas surrounding Mount Watatic in Massachusetts.

This land is a key connector in a major forest block, tying together a total of 6,000 acres straddling the New Hampshire–Massachusetts border. This land is home to moose, bobcat, black bear, and deer. In addition, more than a mile of the historic Wapack Trail traverses the Binney Hill parcels. This project ensures ongoing access for hikers, runners, and nature lovers alike.

Community support from the Friends of the Wapack (a volunteer group dedicated to preserving the Wapack Trail), Town of New Ipswich Conservation Commission, foundations, and private citizens allowed NWT to successfully close on this project.  Thank you to everyone who has donated and helped in this effort!

If you are interested in hunting permission for Binney Hill Wilderness Preserve, please visit our Hunting Program page.

Northeast Wilderness Trust is currently fundraising to purchase an additional 15 acres to expand Binney Hill Wilderness Preserve. The Steel property abuts the Preserve’s eastern boundary. To learn more about this exciting initiative and make a gift to protect this land, click here. 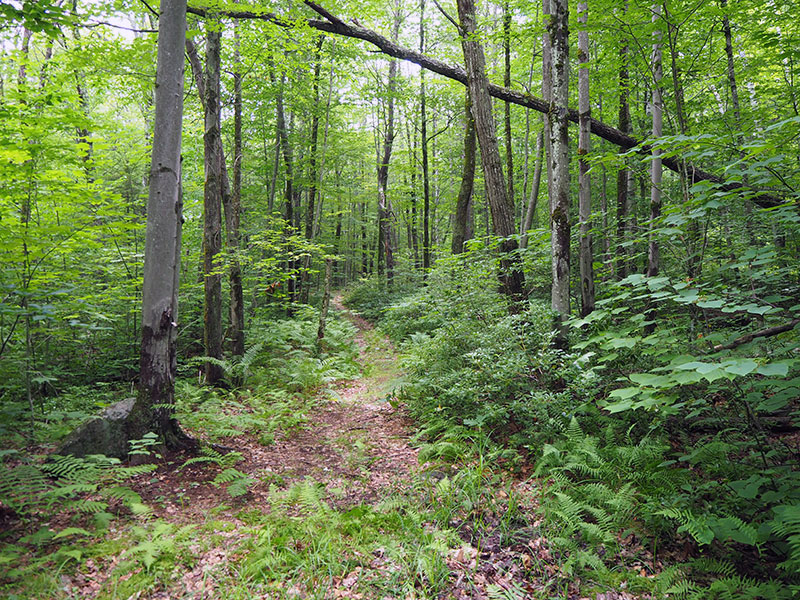 Though the trail was used by many in its early days, it fell into disrepair by World War II. The rebirth of the Wapack Trail was led by the Friends of the Wapack, founded in 1980. Although the Friends rehabilitated the trail and helped it regain popularity, much of it remained vulnerable to development, without any legal protection.

Over the years, protections have been pieced together along Wapack Trail to safeguard both habitat and access, but there is still work to be done. The Wilderness Trust has been a part of rewilding and protecting the land surrounding the trail through the Binney Hill Wilderness Preserve, its Sawtelle Addition (below), and the Wapack Wilderness easement on 1,428 acres. 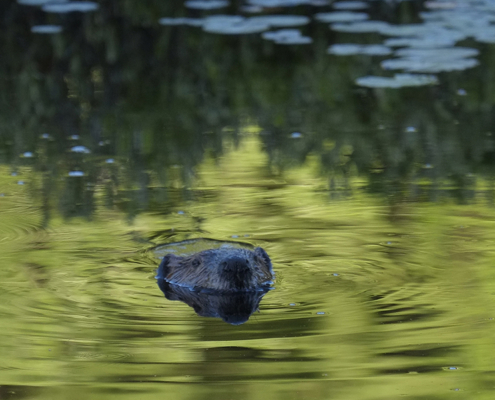 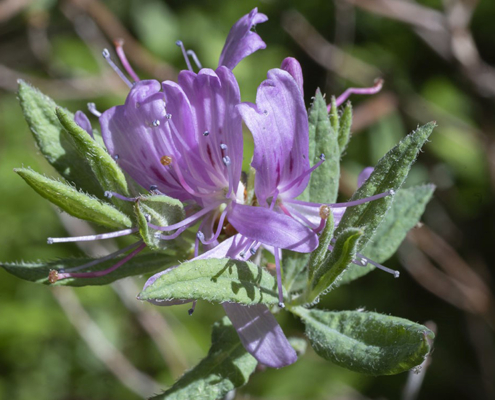 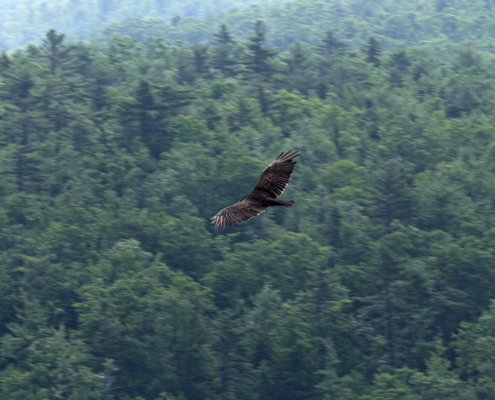 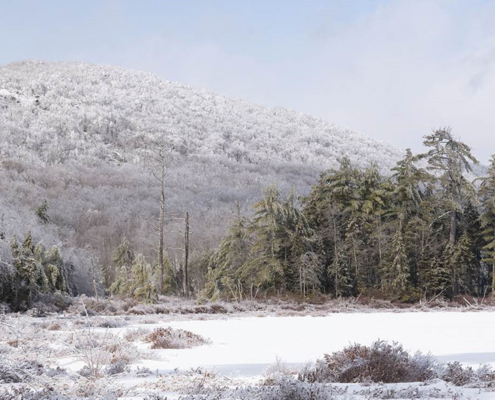 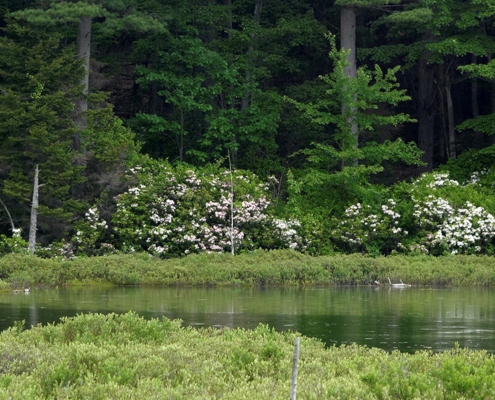 The Sawtelle Addition geographically links the forever-wild forests of Binney Hill to the Wapack Wilderness. It holds a beautiful section of the Wapack Trail and serves as a critical migration route for wildlife. Alongside the State of New Hampshire’s Binney Pond Natural Area, the protection of this tract means that now, the entire Binney Pond shoreline is safe from development.

The Sawtelle Addition is in a location where the movement of species in response to climate change is concentrated through a narrow area. Game cameras on the Binney Hill Wilderness Preserve confirm that a variety of species use this corridor regularly, including moose, bobcats, coyotes, and other mammals. In 2015, the State of New Hampshire identified this area as the highest ranked habitat in the region in its Wildlife Action Plan. 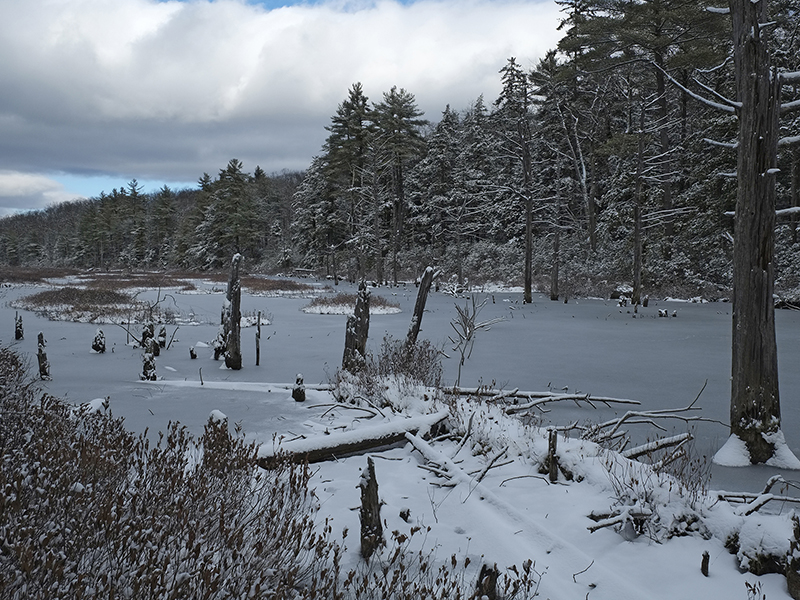 The State of New Hampshire has identified this area as the highest ranked habitat in the region in its Wildlife Action Plan.

Ken and Shirley Sawtelle purchased this property on Binney Hill Road in the 1970s for recreation and a source of firewood. They enjoyed hiking on the Wapack Trail, taking in the view of Binney Hill Pond, and in the spring, the wildflowers put on breathtaking shows of mountain laurel, trailing arbutus, lady slippers and trillium. In 1986, they built their dream home and settled in with the wildlife. After Kenneth’s passing in 2018, a portion of the land was offered for sale to the Northeast Wilderness Trust. The Wilderness Trust officially purchased the property in early 2020, adding it to Binney Hill Wilderness Preserve.

The family of beavers that Shirley has come to love on her property have been making travel difficult on West Binney Hill Road, one of the primary ways to access the Binney Hill Wilderness Preserve. History shows us that when beavers interfere with roadways, the beavers often lose. As part of this proposed conservation project, the Wilderness Trust has installed a beaver deceiver, which allows the beavers to continue living on both sides of the road, while regulating the water depth to maintain access to the Preserve. Though the parcel is a modest 47 acres, its value for nature and people far outsizes its small acreage. Since it sits exactly between the Wapack Wilderness forever-wild easement property, and Binney Hill, it creates a contiguous protected area of nearly 2,000 forever-wild acres. It also safeguards the historic Wapack Trail for future generations, since the trail meanders past the pond over beautiful boardwalks built by the Ashby Boy Scouts in 2001. The boardwalks afford a pleasant hiking experience above the wet terrain, views of the pond, and protection for the fragile wetland soils and natural water flow. 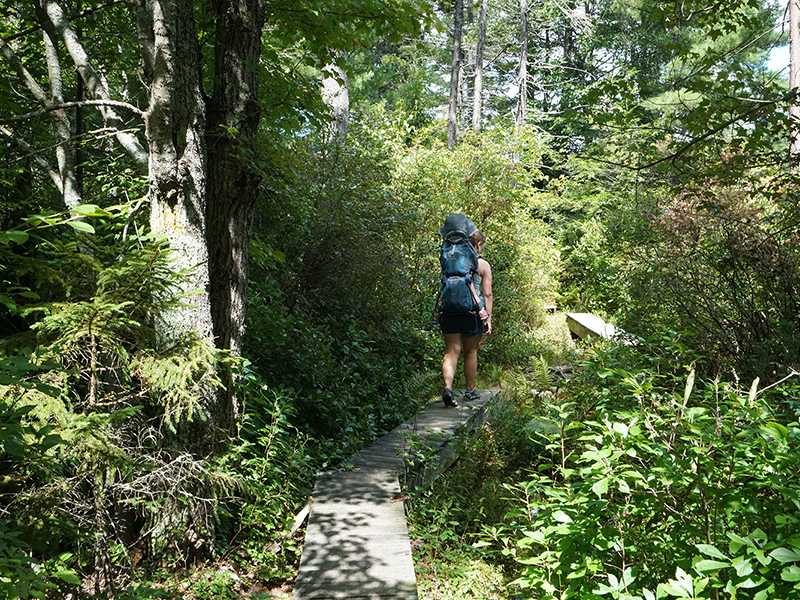